How I finally switched back from Chrome in 2023

My day has been a bit of a rollercoaster.

I was scrolling Mastodon, when suddenly a post appeared that made it clear I need to switch browsers.

I had been using Brave Browser for a while, I wanted to be more security and privacy-conscious, so I switched away from pure Google Chrome. That felt good... Until it didn't.

Turns out the CEO of Brave Brendan Eich donated to the campaign in California to make same-sex marriage illegal. But that was just the last straw for me, a big straw that had me act immediately. Regardless, there was some weirdness in Brave of pushing their cryptocurrency BAT on users and adding their in-browser crypto-wallet prominently without prior question. The weird "give artists crypto but they will only get it when they sign up and we won't tell them". The whole thing about Chrome not exactly being fast.

Should I give Firefox another try?

I had tried Firefox again a few years back. And I hated the experience.

Nothing was where it's supposed to be. Nothing worked how I expected. It added so much unwanted friction and there was no benefit to using it.

But it was time to give it another shot.

So I busted out my favourite package managers.

It imported all my bookmarks right away, so it was time to look at extensions.

None of the extensions I used were Chrome-exclusive!

But not just that, Firefox made it easy to simply set it to "strict" when it comes to privacy to lock out finger-printers and other trackers natively.

The first thing I noticed from the last time trying, was that finally Firefox has merged the navigation and search bar like Chrome does (but gives you the choice to separate them).

Now... let's clear one thing up first. Firefox has a couple of settings I did not appreciate. 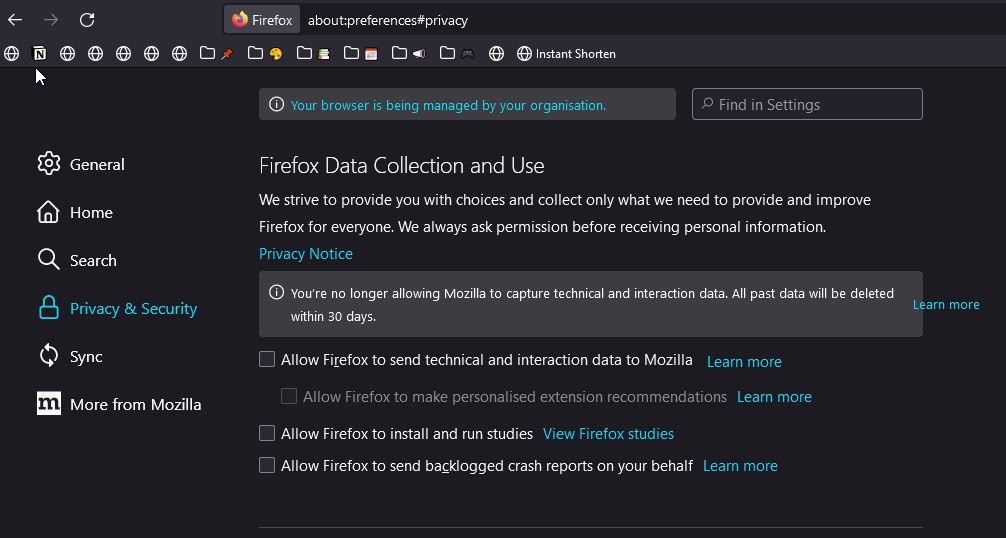 Those were checked by default.

I don't like facebook, nor my browser to perform studies on me. So I unchecked that. If you want to go the whole 9 yards, you can create a privacy config file fore free here, but that may be a bit more advanced.

In that same tab, however, you can also set the Privacy to strict, which seems like a pretty drastic move, as it might break some pages. But so far all websites have been ok.

We can start out with a classic ad blocker: uBlock Origin

And then we'll get the Privacy Badger to cover any trackers that slip through the cracks of everything before.

Then I found all those other extensions that improve online privacy.

A lot of websites (this one included) use so-called "Content Delivery Networks" as a way to get scripts to run in your browser faster. These are also exceptional for tracking you across websites...

So instead LocalCDN intercepts those calls and serves those scripts directly from your browser. Pretty neat honestly.

Then we can also build a lovely cage around facebook, because I'm still not over Cambridge Analytica.

And finally, we can scrub links that we click. Those links often contain some information where you came from, so clean URLs takes care of that.

What Chrome didn't have

Here the idea is that you can basically build groups of "online personas" that are presented to the web-trackers that might make it past your settings.

Here's a basic approach I took:

I have a container for social media profiles to group those together. My banking is in a specific container. My shopping is in a container. And something of a work profile. Basically considering which specific trackers shouldn't interact with the other trackers to build a full profile of my online activities.

You can even force some containers to only open websites you added previously to make sure there are no accidental spill-overs by absent-mindedly browsing amazon.

And there are also fun bits Firefox has Chrome didn't have. Every list I looked at pointed out the Firefox Dark Reader, which forces any page you want into dark mode.

Let me be honest here. This one almost made me stop using Firefox again.

If you're used to adding search engines to Chrome, you are used to simply adding an URL with %s as the query string. This is actually also how Firefox on Android does it!

Firefox on Desktop doesn't and I had to Google how to change the default search engine to something other than Google or Duck Duck Go.

But I figured it out by trying out the solutions suggested, and here is how you can add a custom search engine. 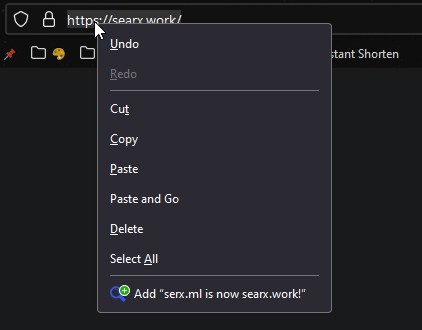 It's a bit counter-intuitive, but it's possible!

I was a bit of work getting all the fun extensions I use set up again. Luckily they mostly have some kind of data export and import.

It feels like I could set up Firefox to be extremely customized and privacy-focused (with a bit of coercing sometimes).

I can't wait to slowly make this the mess I like to live in!

In Today I Learned I share little daily learnings I make in different technologies, languages, and topics. These are short posts meant to document my learning in public. For longer-form content check out my other articles.