21 years ago, a mathematician became famous.

John Nash was the protagonist of the movie A Beautiful Mind. The movie is based around the real life of the mathematician. It starts at Princeton and draws the audience into a point of view of a person with schizophrenia that doesn't know.

Despite his mental struggles, Nash's contributions to mathematics are instrumental in machine learning.

In the movie, Nash has a breakthrough and eventually earns the Nobel prize.

Nash gets convinced by his roommate to stop stressing about his contribution to science for once and join them at the bar. Let loose a little. There, as bars in the 1950s would have it, they met a group of young women.

Narratively, this group was comprised of precisely the number of people the men had in their group. However, one woman was blessed with exceptional beauty and attracted the attention of all the men. They started plotting how they could compete for her attention when Nash had his world-changing insight: The Nash equilibrium.

In a non-cooperative game, like competing for the hand of this beautiful woman. No optimal solution can be found. Rejected by the beautiful woman, these men would one by one turn to a woman they'd consider 2nd prize. No one wants to be a second prize, so clearly everyone would go home slightly disappointed and alone, Nash points out.

So what has to change?

How the bar scene changed my worldview

The men could decide to cooperate.

Nash likens this to economic models, where companies are competing for the same customers or resources.

But this parable goes deeper for me. In open-source, we have all this code that gets written. We often get the notion that this is the main contribution and everything else is worth less. We have to write documentation, make usage examples, review commits, and of course, there's the question of funding.

My mindset shifted to seek collaborative games and shift mindsets to a collaborative one. Open-source contributions are collaborative, and they all add to the success of a library, however small they may be. A rising tide lifts all ships.

Additionally, it's not a bad thing to grab a drink with friends from time to time. 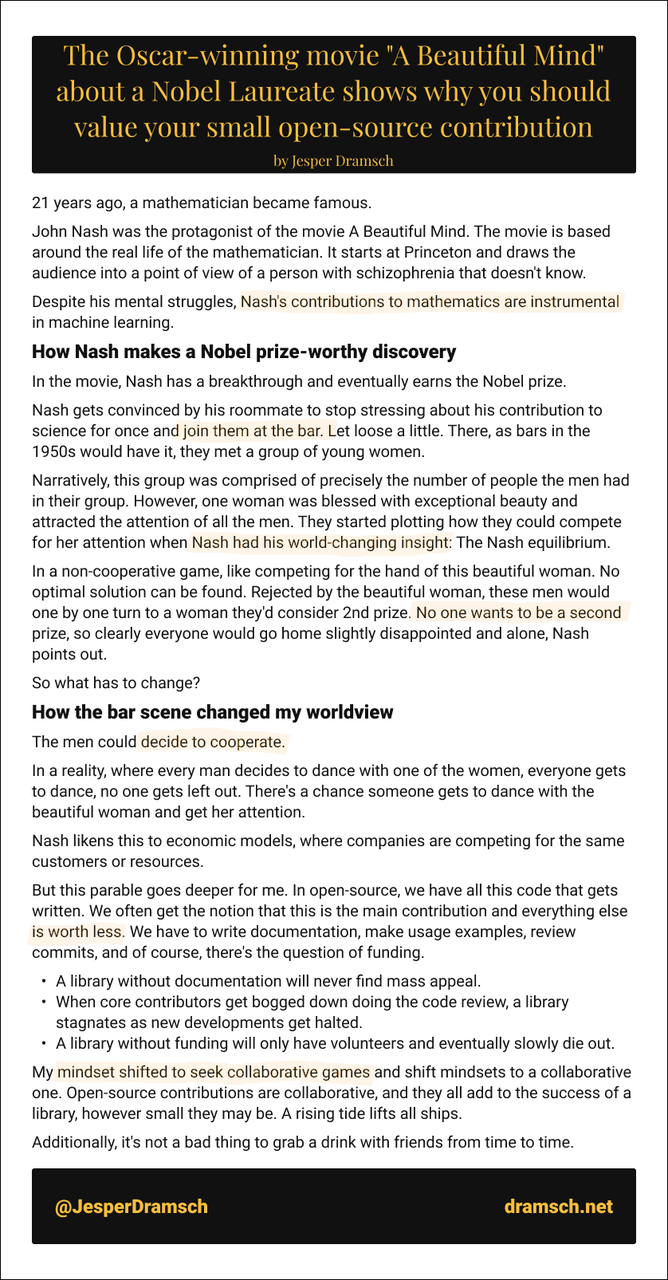