I made some good choices and you can too!

I made some good choices and you can too!

I've never told this story before.

It was Friday afternoon when I got an email from an official university address. The email demanded I come into the office on Monday at 8 am. There was a case of plagiarism in the coursework I submitted.

Plagiarism is one of the most severe forms of academic misconduct. If anything, academic integrity relies on being truthful about your data and conclusions and making sure it is your work.

To make matters worse, this was a group assignment. Even worse, I was one of the best programmers in my class. I was chiefly responsible for this programming assignment for three others and myself.

Had I just doomed the academic career of three of my friends?!

This weekend had me worried sick.

I knew I had worked through existing solutions in other languages to understand what they were doing. I scoured Stackoverflow for solutions to the individual problems I couldn't solve right away.

Was this actually not allowed?

This is how every programmer works! I know it is how the best solve problems. Learn from others and use Stackoverflow to find and share the optimal solutions to subsets. Did I accidentally copy something verbatim?

I was ready to take the full blame. My peers shouldn't be held accountable for my actions. But, I had two days and three sleepless nights. I would come prepared.

No way, I would go down without a fight!

I was a silly geophysics student.

I attached licenses to all my codes, even as a small Bachelor. And I did this one thing that ended up saving my entire academic career and that of my friends.

During the development of code for assignments, I realized that I would often make breaking changes to code, trying to improve them. Ctrl + z often didn't fix the breakages I introduced, so I started using git to save snapshots on Github.com using private repositories.

I printed out the entire commit history of our project in addition to two other assignments, so I could argue that the code grammar I used, including variable name conventions, were similar enough to prove I had written large sections of the code.

It transpired that a classmate had broken into the university directory of one of my peers and stolen our project. They removed the license and translated all variable names to German verbatim. They didn't even notice the little .git folder.

That's how good software practices and using Github saved my friends and me in our Master's degree. 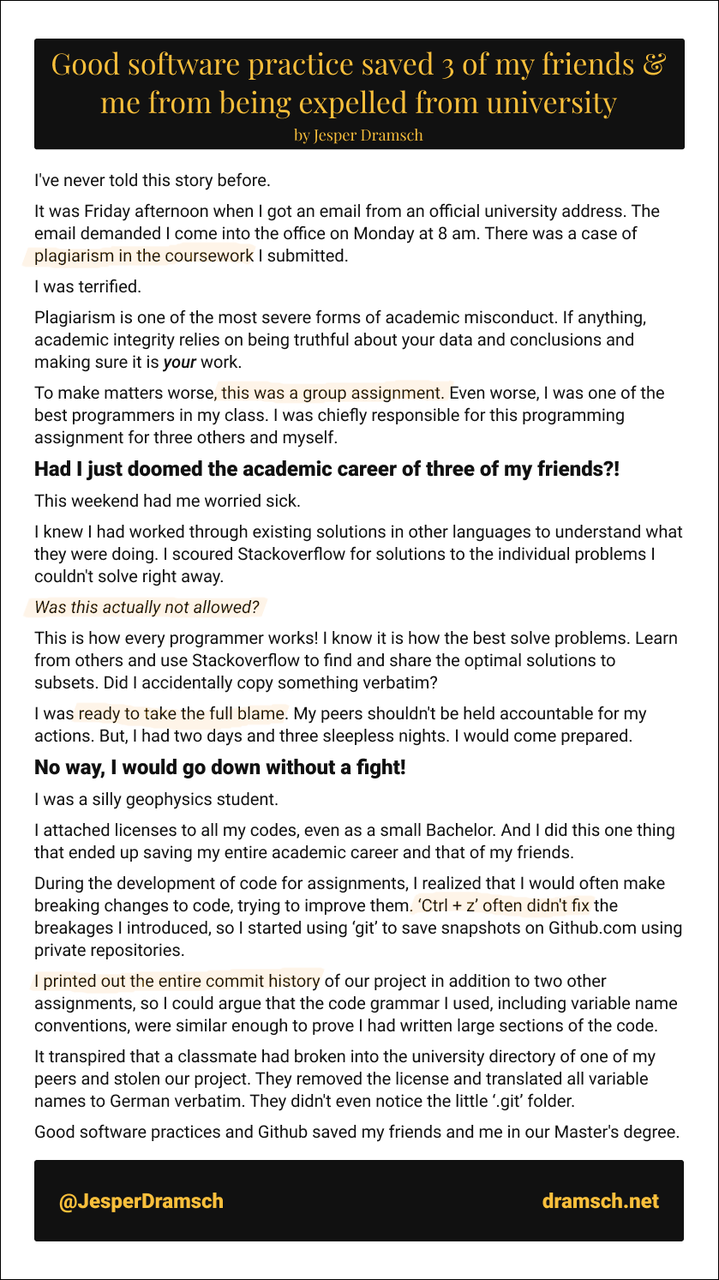