5 Lessons from Creating an Essay a Day for 30 Days

5 Lessons from Creating an Essay a Day for 30 Days

On October 1st, I decided to do what seemed impossible to me:

I joined the October cohort for the digital writing course Ship 30 for 30. It was created by Dickie Bush and Nicolas Cole to teach a modern style focused on rapid iteration and crowd validation in a social media world.

Here are the 5 things I learned and lessons that surprised me.

I was surprised by how easy it became to generate ideas.

It took some time to get going, but once I got into the swing of sharing atomic ideas, the ideas didn't stop. Instead of running out of thoughts, new ideas sprung up by themselves, from comments, discussions, and private messages. In the last few days, I had multiple ideas throughout the day and was able to pick my favourite.

Writing daily had become relatively easy, taking less than an hour from idea to publication.

On Monday, I was invited onto a podcast.

It was incredibly easy to discuss topics that I had written about already. My thoughts were better-formed and as structured as they get. It was a delight to discuss things I had already written about.

I've signed up for many courses.

From Coursera, to Gothamchess, to Matt D'Avella's Master Youtube, my completion rate is abysmal. This is generally true in the MOOC space, the completion rate of online courses is on average 12.6%.

I would not have finished this course without the live sessions, community, drip content, accountability partner and focus groups. I've had some amazing conversations around the content, almost taking me back to school.

If I had ever enjoyed school, that is.

I honestly wasn't sure if Twitter was worth it.

Turns out I was just overthinking the platform, inconsistent and boring. Regularly publishing these essays had pushed me over the next round 100, slowly creeping towards 2000 followers on Twitter and 4500 on Linkedin. However, that even mattered less at that point.

Engaging in conversations was where the fun began!

Writing daily meant being on the radar of many people.

I had interesting conversations on Twitter with people from all walks of life. (Can you believe it?) Those conversations were often insightful and heartfelt. One person even told me they'd miss these essays.

People chimed in, who I'd never expected to comment on my writing.

Overall, writing daily for 30 days has been extremely valuable and built my confidence in writing about smaller ideas.

I have to warn you, though. This is highly addictive. 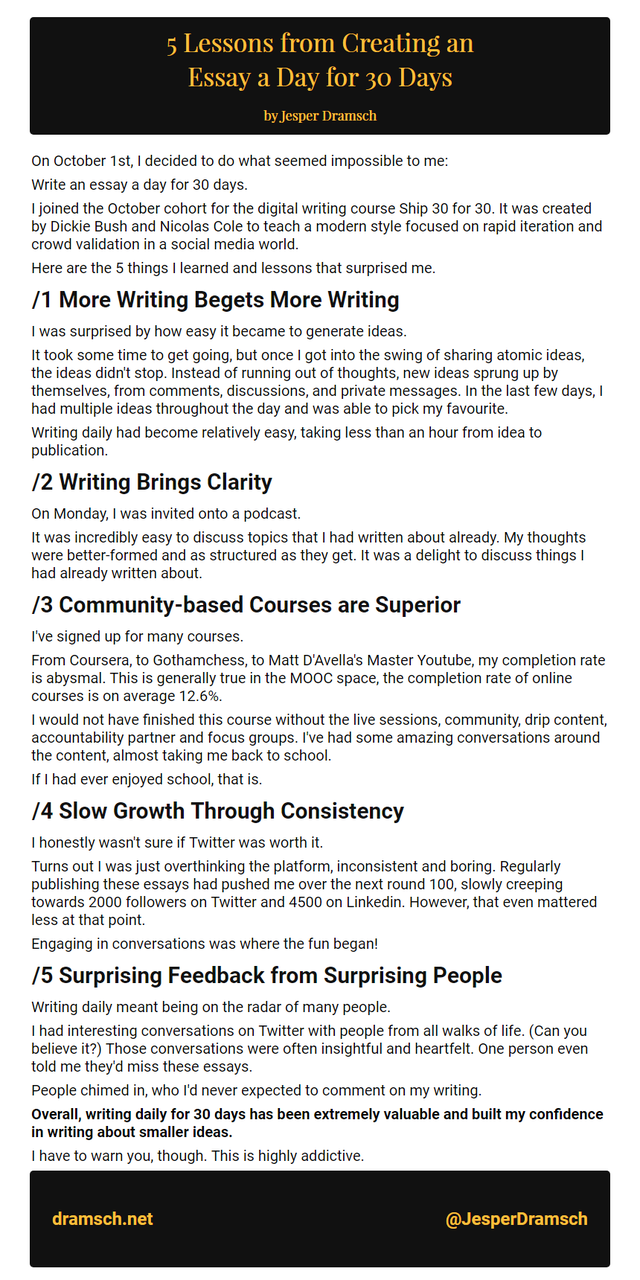